This post is an introduction to our resource page, Your Memorial Cost Guide: How to Understand the...

Posted by Alecia Milano on September 3, 2019

Relocating an old monument is no easy task—especially when the memorial is a life-size bronze statue that weighs several thousands pounds.

First you need the right equipment to carefully remove the age-old piece from its original location. Once you’ve done that, you must safely transport and reinstall the relic in a new location. It’s a job that requires a lot of planning, focus and experience.

The daunting task didn’t stop Milano Monuments from relocating and restoring a life-size, bronze statue of the First Catholic Slovak Union (FCSU) founder, Rev. Stephen Furdek. The team traveled more than 300 miles to move the statue to the new FCSU headquarters—from eastern Pennsylvania to Northeast Ohio—and even made it shine like new in the process.

After a referral from the Cleveland Catholic Diocese, the FCSU contacted Milano Monuments to see if they could help relocate a statue from Middletown, PA to their new headquarters in Independence, OH.

With the statue standing more than five feet tall and weighing several thousand pounds, moving the bronze tribute was no simple task. In addition to transporting the statue more than 300 miles, the FCSU also wanted the piece rebronzed. Milano Monuments gladly accepted the project, gathered its equipment and headed out to Middletown, PA. 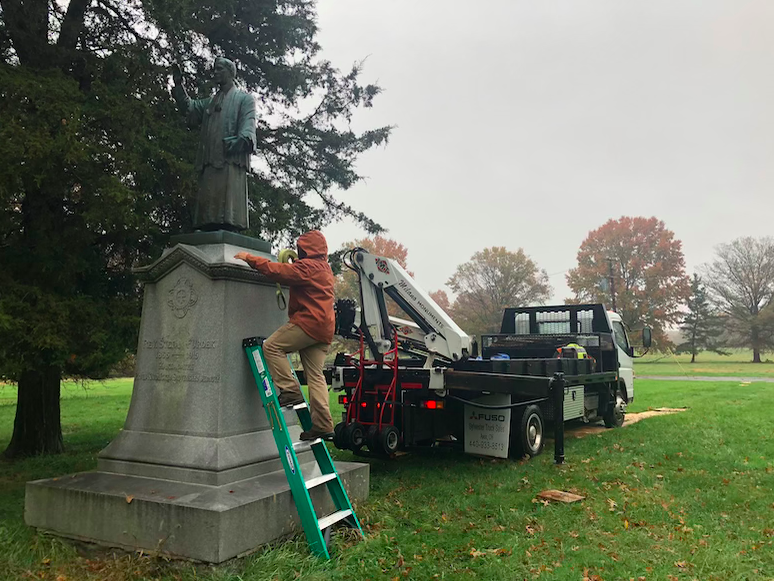 Original site of the statue in Middletown, PA.

The statue was located in a wide-open field so there was no problem maneuvering the equipment. When a statue is located inside a building, getting a crane or a forklift inside can be a challenge (see this example at St. Ambrose Church). Luckily, that wasn’t the case for this project.

What did present a challenge, however, was that the figure was made of bronze. Unlike granite, metal can ding, twist and break differently, so the team had to be extra careful to safely remove, transport and reinstall the statue.

Once loaded onto the truck, the next step was to restore the statue to look as nice as (or even better than) it did when it was first created. 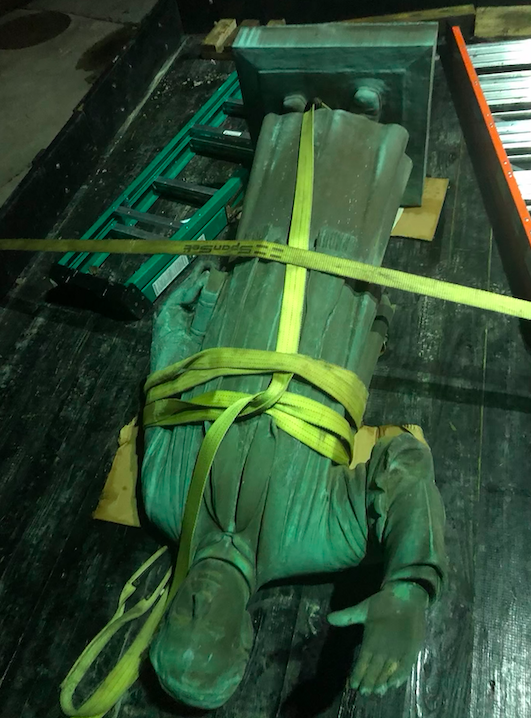 The original condition of the statue before restoration.

Once the statue was removed from the original pedestal in Middletown, Milano Monuments transported the life-size figure to a bronzing facility in Pittsburgh, where the reverend was cleaned and restored to the original bronze color. 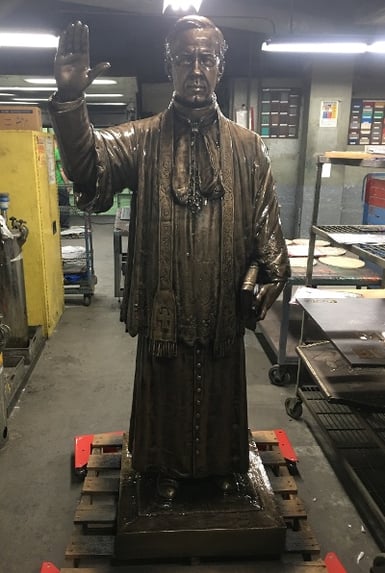 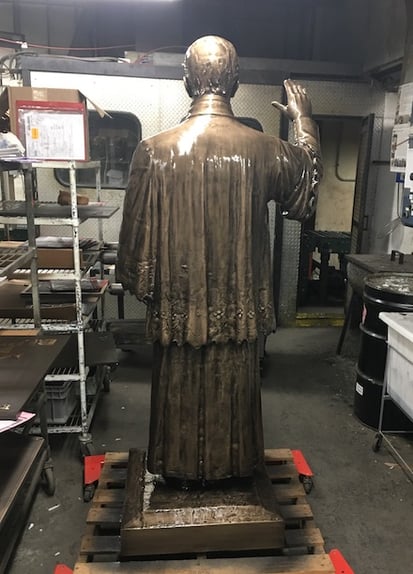 After the restoration was complete, Milano Monuments transported the piece to the new FCSU headquarters in Independence, OH, where it was installed between two flagpoles on a new granite pedestal.

Restored statue installed outside of the First Catholic Slovak Union in Independence, OH.

The Pedestal: Good as New

Since the pedestal could not travel with the rest of the statue to Ohio, Milano Monuments designed and created a brand new granite pedestal to explain the most important aspects of the statue.

Given its prominent placement at the building’s entrance, the FCSU wanted to include the following information:

As the picture above indicates, some of the granite polish was removed to reveal the natural stone, creating contrast for the most important pieces of information.

Churches, companies, organizations and other groups that want to relocate and restore a statue often don’t think it’s possible. But the transformation above show what’s possible!

Although relocating the Rev. Stefan Furdek statue was a complex project, the FCSU made it easier by providing details about the location and asking all the right questions.

If you’re planning to relocate a monument or statue, consider these details to ensure your service provider is capable of a safe and successful relocation:

Relocate and Restore Your Statue Safely with Milano Monuments

No matter the project, we have the experience and equipment needed to safely relocate and restore your statue or monument.

Our equipment, cranes, trucks and expertise enable us to safely handle all types of materials and finished pieces. Contact Milano Monuments to discuss your commercial project. 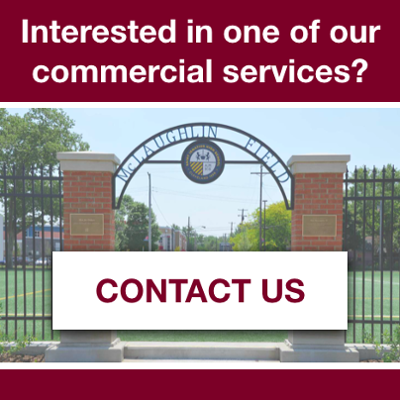 Set in Gold: Restoring Pride to a 75-Year-Old World War II Memorial
Seventy-five years ago, the City of Cleveland Heights dedicated a memorial in honor of its many...
Cleveland's Soldiers' and Sailors' Monument: What You Need to Know
One hundred and forty years ago, a group of Civil War veterans met at Case Hall in Cleveland to...
4 Commercial Signs that Stand Out in Cleveland
There’s a lot that goes into creating a commercial sign that stands out from the crowd. You must...