After Sandy Pegram lost his mother, he knew whoever designed and created her memorial needed to be up for the task. As he put it, he was “entrusting a company to construct not only the right type of memorial for my mother, but one with a truly impressive edge.”

A self-described “stickler for perfection,” Sandy knew he’d have high standards. With an idea of what he wanted in mind, here’s the story of how Milano Monuments delivered beyond his expectations, showing compassion and empathy throughout the process.

What to Expect from a Memorial Provider: Design Expertise and Craftsmanship

Designing and purchasing a memorial is not like any other decision you make in life. It’s not like buying a car or even a house. You don’t use a memorial for a few years or a few decades before moving on to a new one; a memorial the lasting representation and symbol of a person’s life.

We appreciated that Sandy came to us with high expectations for his memorial and agreed with the importance of aiming for perfection.

About the Memorial Design

There were several features Sandy wanted incorporated into his mother’s headstone. As you can see from the photo below, the memorial includes:

While Sandy came to Milano Monuments with these ideas, he was especially appreciative of two aspects that our memorial specialist, Michael Feinberg, helped make a reality.

The mix of honesty, expertise and empathy Michael had throughout the process really stood out to Sandy. And when it came to the end result, Sandy and all of Julia’s other friends and family were enamored with the memorial.

If you want to learn more about Michael Feinberg, an award-winning designer and Certified Memorialist, we interviewed him and wrote about it in this article.

What to Expect from a Memorial Provider: Empathy and Personal Care

People often say that a funeral is not for the person who has passed, but for those who grieve their loss. We often think of memorialization in the same way.

According to Talk of a Lifetime:

At Milano Monuments, we understand that it’s not just about the memorial we design with you, it’s about the process and your experience, too.

Sandy had glowing words to say about his experience working with the Milano Monuments team. He spoke highly of the entire staff, saying they were “courteous and professional at every level.” We are used to working with families in the midst of their grief, and Sandy said that working with us “made the final mile of a very emotional and heart-rending experience more tolerable.”

We were saddened to hear this wasn’t what Sandy experienced at other memorial providers. He told us this:

“There were other equally experienced companies I had initially considered, but after having a conversation with members of their staff, I felt they viewed me as merely ‘one more typical customer of theirs.’ They were not as compassionate—and definitely not as understanding—as the staff at Milano Monuments.”

At Milano Monuments, we want each and every family to receive a personal experience. We don’t come to the meeting with a script, but want to help guide and be a resource through the process.

Our team views each and every family with care and respect. We understand the importance of memorialization, and the immense stress and grief the process can cause. If you want to start the conversation to memorialize a lost loved one, or to preplan for yourself or someone else, schedule an appointment. 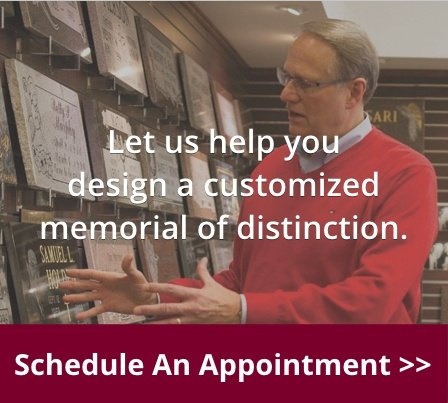