Cleveland's Soldiers' and Sailors' Monument: What You Need to Know

One hundred and forty years ago, a group of Civil War veterans met at Case Hall in Cleveland to discuss plans for one of the most transcendent Civil War memorials in the nation.

Fifteen years later, President William McKinley dedicated the finished Soldiers' and Sailors' Monument, which honors the 9,000 people of Cuyahoga County who served in the Civil War.

With over 100 tons of cast bronze, standing 125-feet high, the monument’s unique art and architecture remains a present-day reminder of the patriotic virtues American’s value to this day.

Below, we provide a brief history, as well as highlight several key design features of this monumental tribute that is still a focal point of Cleveland’s Public Square.

History of the Soldiers' and Sailors' Monument

In May of 1888, the Cuyahoga County Soldier's and Sailor's Union unanimously approved a proposal to erect this massive monument. Two years later on August 25, 1891, construction began with lead architect Levi Scofield at the helm.

Although Scofield was the head architect, a committee of 12 former soldiers and sailors were responsible for the design. The committee voted on whether they wanted the monument designed as a shaft or as a memorial hall. The vote was split, resulting in the decision to include both styles.

A few years later on July 4, 1894, the Soldiers’ and Sailors’ Monument opened to the public. This long-anticipated celebration featured a parade over five miles long and an opening address made by McKinley.

“What does this monument mean? It means the immortal principle of patriotism. It means sacrifices for the country we love. It means not only love of country, but love of liberty!”

Designing the Soldiers’ and Sailors’ Monument

The monument consists of a 110-foot black Quincy granite shaft topped with a 15-foot bronze “Goddess of Freedom.” Fitted on a square base with granite blocks trimmed in sandstone, the shaft sits on top of the memorial building that houses the names of the veterans and bronze busts of the officers killed in action. 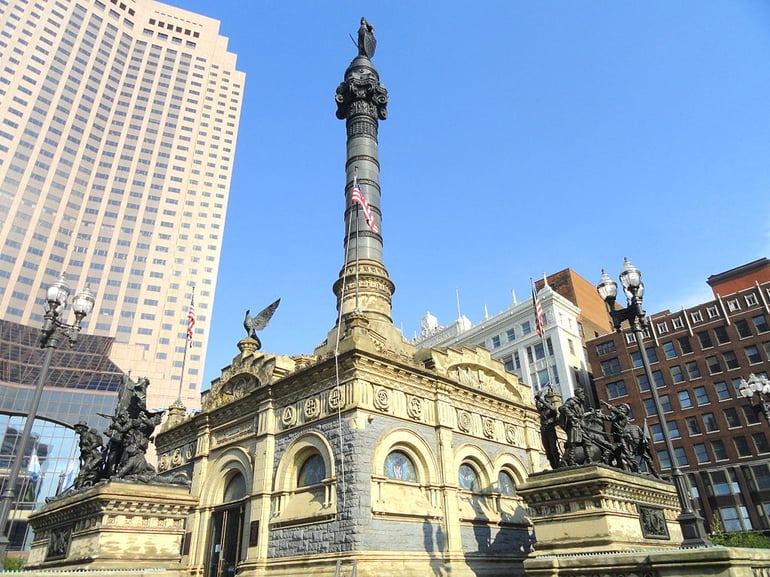 Surrounding the exterior of the base are four groupings of bronze sculptures illustrating various battle scenes. These groupings represent the main armed services:

Inside the memorial is the tablet room that contains lists of Cuyahoga County residents who served in the Civil War, as well as four bronze sculptures representing the:

In 2008, the city spent two years and $2 million restoring the Soldiers’ and Sailors’ Monument. Following the restoration, the monument was reopened to the public and is open for visitation year-round.

Interesting Facts About the Soldiers’ and Sailors’ Monument

While the outside appearance of this vast monument is enough to marvel at, there are several interesting facts about its design and construction that is more than meets the eye.

Levi T. Scofield, the renowned Cleveland architect who designed the Soldiers’ and Sailors’ Monument, was also a major proponent of the monument and even provided all of his professional services free of charge.

He also designed other historical landmarks, including the Ohio State Reformatory in Mansfield, which was featured in the film, The Shawshank Redemption, and the Kimpton Schofield Hotel in Cleveland.

The Goddess of Freedom 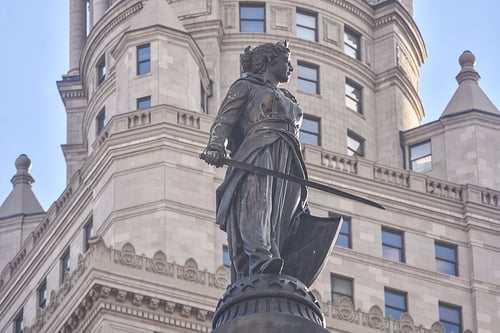 Capping the top of the 125-foot monument is a bronze statue of the Goddess of Freedom. She stands holding a sword in her right hand and a shield in her left. The statue is 15-feet tall and is rumored to have been modeled by Mrs. Scofield, the sculptor’s wife. 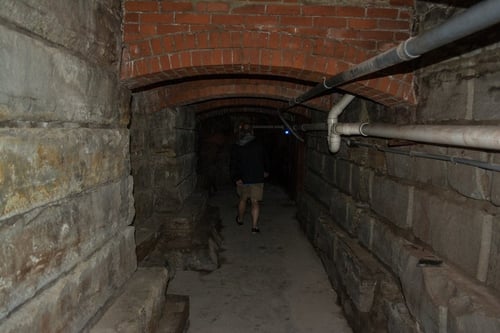 The Soldiers’ and Sailors’ Monument is built on top of underground catacombs that add to the structural integrity of the piece. The system of circular tunnels was needed to distribute the weight of hundreds of tons of black granite, bronze statues and the 125-foot-tall column.

Thanks to the work of some Ohio high school students, the names of more than 100 African American troops from Cuyahoga County have been or will be added to the monument.

A pair of bronze doors are mounted at the north and south entrances of the monument. Each door has three bronze panels with a decorative handle bar fixed between the lower two panels. The doors do not have any hinges. They are set with pivots in bronze sockets fitted into the stonework and the locks are constructed the same as bank safes.

Want to Learn More About Historical Monument and Memorialization?

Are you interested in learning more about monuments and memorialization? If so, subscribe to our blog to get the latest Milano Monuments resources delivered straight to your inbox.

Set in Gold: Restoring Pride to a 75-Year-Old World War II Memorial
Seventy-five years ago, the City of Cleveland Heights dedicated a memorial in honor of its many...
4 Commercial Signs that Stand Out in Cleveland
There’s a lot that goes into creating a commercial sign that stands out from the crowd. You must...
How a 100-Year-Old Statue Traveled 300+ Miles and Arrived Good as New
Relocating an old monument is no easy task—especially when the memorial is a life-size bronze...